why visuals are so powerful in Presentation Design

5 Reasons why visuals are so powerful in Presentation Design.

Stunning visuals in your Presentation are a vital tool!

65% of people are visual learners.

According to one study, only 10-20% of information was retained over time when represented through written word, but that number increases to 65% when the information was presented visually. In fact, Psychologist Jerome Bruner of New York University shows that people only remember 10% of what they hear, 20% of what they see but about 80% of what the see. Also 83% of learning occurs visually. This is because visuals are processed in a different part of the brain, called video space sketch map, giving you a much stronger and vivid memory, letting you remember what you said and why it is important.

Humans think in pictures. This aptitude comes from our early ability to see before speaking as a baby. The child looks and recognizes before it can speak. So, before being able to speak, babies are able to understand, recognize the world and even communicate because they can think without using words. Visual image consist in our very first apprehension of the world and as a result, our first tool to think and communicate. As grown up adults, we still think and communicate using pictures. This ability consists in and alternative to language barriers. Indeed, whenever two human beings do not share the same language, they can try to communicate through non-verbal communication and images.

But what are the 5 specific reasons that we should be aware of about the importance of inserting visuals in every slide of our Presentation?

But what are the 5 specific reasons that we should be aware of about the importance of inserting visuals in every slide of our Presentation?

1. They are processed faster.

Did you know your brain can see visuals that last for just 13 milliseconds? That is an insanely short period of time, yet your mind can still retain that visual. Along with this incredibly short amount of time needed to retain an image, 90% of information transmitted to your brain is visual. The reality is you are hardwired to see information much more than you are to hear it. As a presenter, that means you have the unique ability to deliver information quickly using compelling imagery that cannot be achieved with the written or spoken word.

Visuals can provide a more efficient explanation to help people understanding a concept or an idea. Graphic interpretations are instantaneous and easily accessible comparing to text. Indeed text involves more efforts from your brain as you have to decode text on a linear and sequential manner to interpret the meaning. On the contrary, the brain is adapted to interpret simultaneously various images and is able to process them 60,000 times faster than text.

Just look at these 2 slides and to notice the difference: 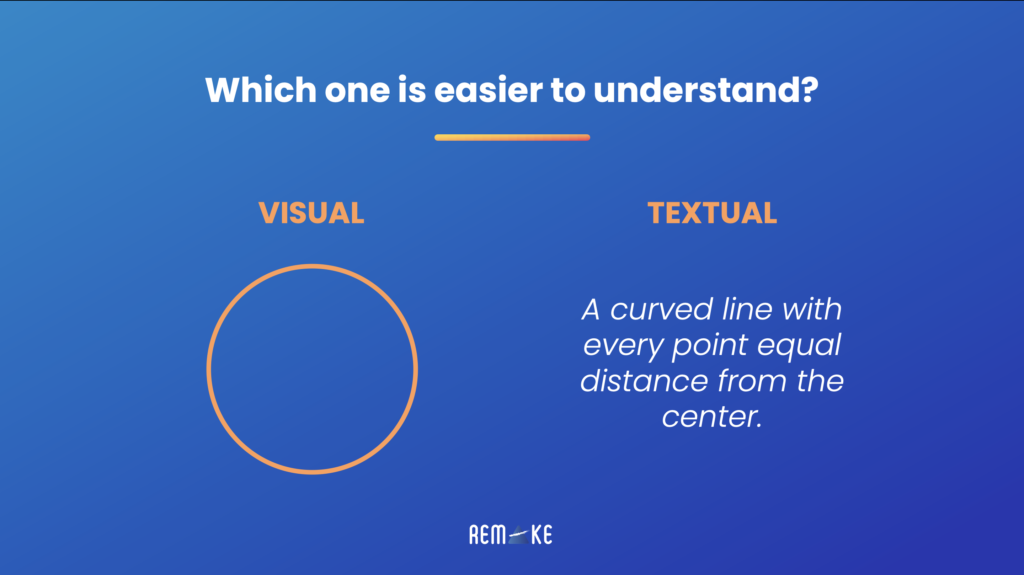 2. They stay in your memory long-term.

Visual aids can help your audience understand and remember the content that you discuss visuals provide emphasis to what you said. According to a study by the US Department of Labor, you can increase your audience’s retention level significantly by appealing to more than one sense at the same time. Three days after a presentation, a person that only listened to the presentation remembers only 10% of the information, while a person that experienced both the verbal and the visual aspect of the presentation remembered 65%. 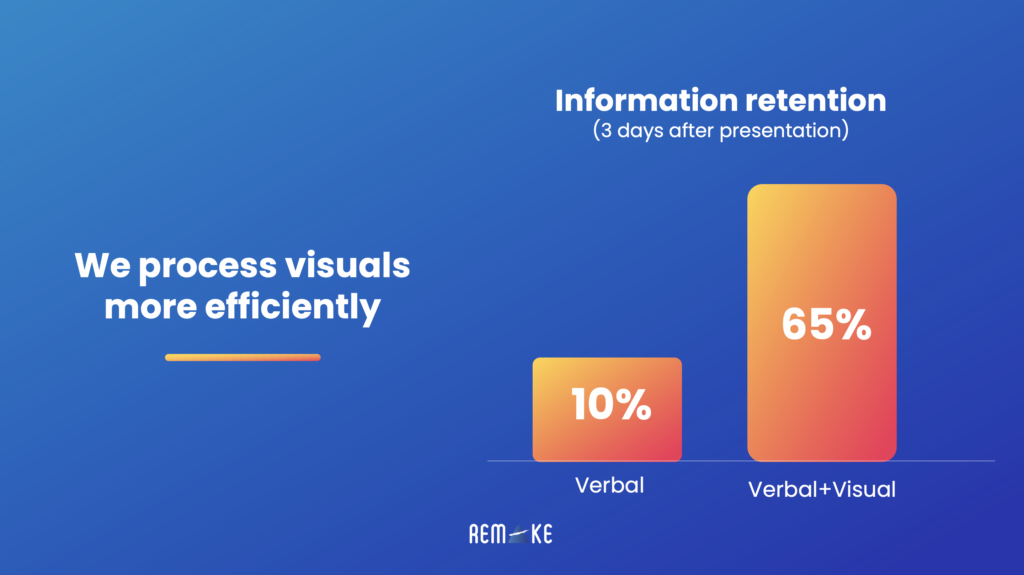 This is because visual elements also happen to be easier to remember because of the process engaged by our brain. Certainly, words and images are processed differently. We use our short-term memory to retain words whereas images go directly to our long-term memory.

The third reason why Presentation Design’s visuals are fundamental is because they engage the audience. It is well known that visuals capture and attract our attention. We are more likely to consider with better attention a visual material comparing to a text. Also a good design, colors and layout make us more attentive.
The reality is we live in a digital and visual age. With the uptick in smartphone purchase and usage our minds are constantly taking in visual stimulation. Whether that is good or bad does not matter what matters is that your audience is used to taking in visual information. Why then would we choose to rely solely on our speaking skills and poor design concepts to communicate our message. As a presenter you must play in to the strength of a visual generation and leverage your design to engage your audience. Presentation design is a vital part of every presentation; however, it is often overlooked and under resourced. Don’t make the mistake of settling for a boring template. Instead leverage your design and create a standout presentation that will bring your audience back time and time again.
In addition, if the presentation needs to be presented in real life, an additional reason is that visuals are not only better for your audience, they are better for the speakers themselves as well. The use of visual aids influences the perception of the speaker. A speaker that is using visual aids is perceived as better prepared, more dynamic, more credible and 43% more persuasive according to 3M. That is very powerful. 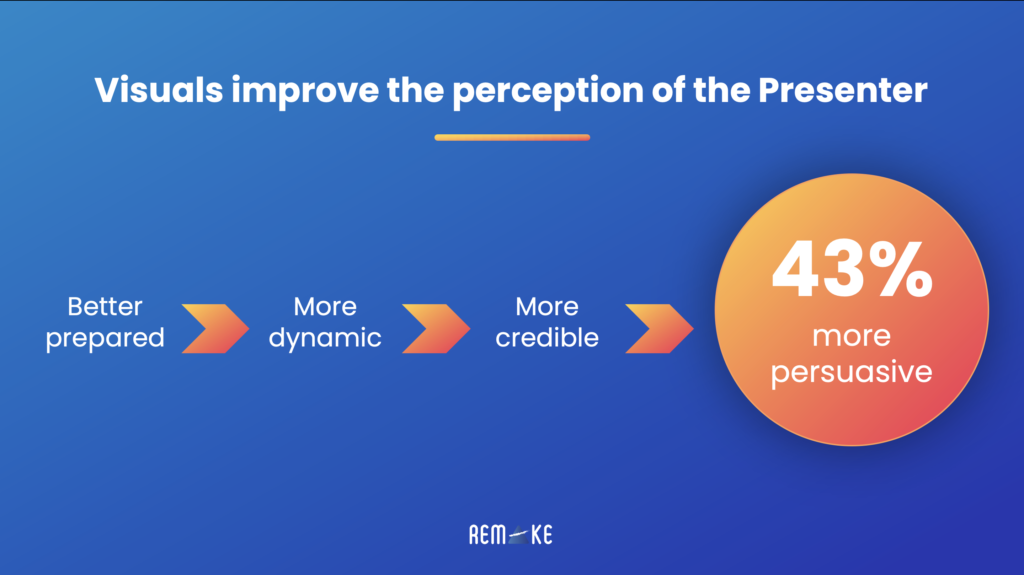 Visual elements not only provide data more quickly and efficiently, or better attention but it also affect us on an emotional point of view. After having captured our attention, these visuals in your presentation have the power to evoke emotion and as a presenter you must leverage your design to help take your audience on an emotional journey.
J. Francis Davis, a media education specialist said that «Visuals are not only excellent communicators but also quick affect us psychologically and physiologically». On the physiological level, research shows that exposure to certain color influence us. For example, being exposed to the red color would heighten our breathing rate and pulse. On the psychological level, images influence us because we use our imagination to interpret the stimulus (We will talk about the effect of colors more in depth in the next article 🙂 ). 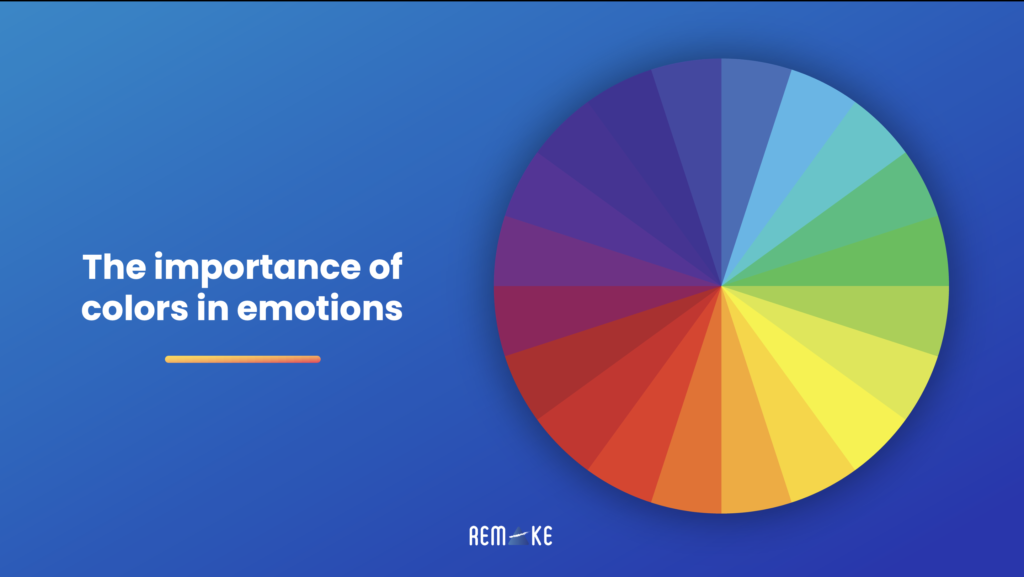 5. They influence on decision-making.

Because visuals have an effect on our emotions they influence our decision-making process.
KissMetric revealed in its survey that “93% of people surveyed responded to visual appearance when choosing a new product». In addition, the primary color used to identify the brand is responsible for 88% of brand recognition. Finally, 88% of surveyed place color as the primary reason when they are looking to buy a particular product. These figures underline the particular power of visuals when buying a product.
We can wonder, How is it possible that appearance matters that much when choosing something? Why are we always more attracted by products with a better appearance without paying attention to the efficiency of the product, if it works better than the less designed one? Don Norman answers this question by saying that this uncontrolled attraction is the result of «the extremely tight coupling between emotion and cognition».
Indeed, emotion and cognition play two different roles in the apprehension of the world. Emotion makes us judging the world whereas cognition helps us understand it. Human brains use both of these tools to evaluate its surrounding environment and it definitely affects our apprehension of things. As a result, when we decide to buy the more attractive product in comparison to another less attractive product, but which works as well as the first one, we implies emotion in our decision making process.
Nobel Prize, Herbert A. Simon showed that our decisions are based on intuitive judgment and emotions. Most of the time, people cannot make rational decisions because of several bias that affect their decision-making process. They have incomplete information, time restriction and inability to calculate consequences, that is why they have to rely on their intuition (and as a result on emotions) to make a decision. Here again, we have another proof of the importance of emotion in our decision-making process. As visual communication affects our emotion, it affects our decisions. 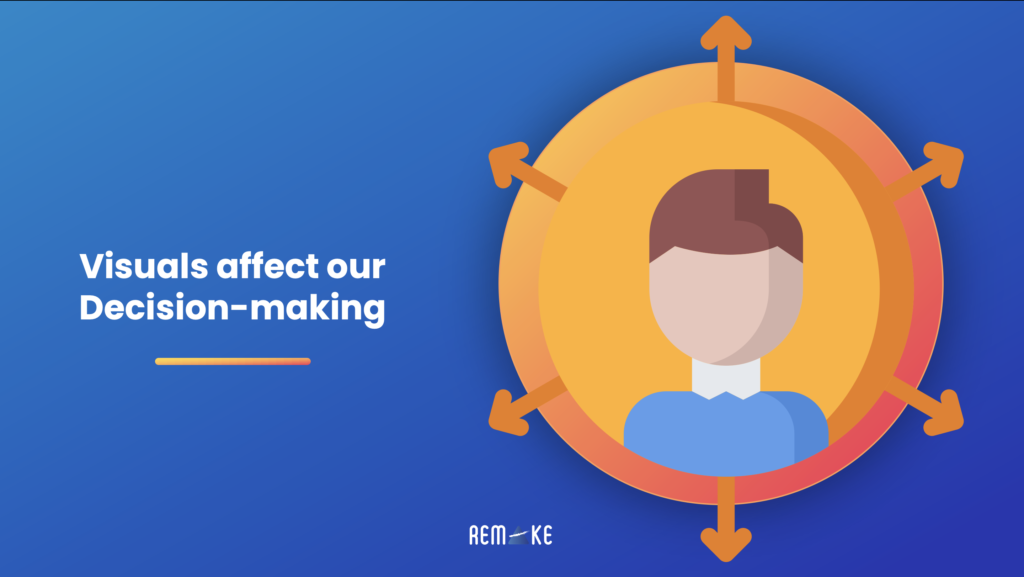 Another experiments, led by the Stanford Persuasive Technology Lab, shows us how design counts in the perception of a product. In this experiment they asked 2,440 participants to evaluate the credibility of a website an 46,1% declared that the design of the website was the first criteria they chose to make their opinion about it.

Moreover, Robins and Holmes (2008) showed that this opinion based on the website appearance is approximately made in 3.42 seconds. So this experiment shows us that about half of the population builds their opinion very quickly and on appearance criteria.

The benefits of visuals in Presentation Design are clear, they enable to envision information. Visuals in presentations help us in our decision making process as it provides clear and quick information, but also engage our emotion and influence our intuition.

Start with us the design of your new Presentation!

We use cookies on our website to give you the most relevant experience by remembering your preferences and repeat visits. By clicking “Accept”, you consent to the use of ALL the cookies.
Cookie settings Reject All Accept
Manage consent

This website uses cookies to improve your experience while you navigate through the website. Out of these, the cookies that are categorized as necessary are stored on your browser as they are essential for the working of basic functionalities of the website. We also use third-party cookies that help us analyze and understand how you use this website. These cookies will be stored in your browser only with your consent. You also have the option to opt-out of these cookies. But opting out of some of these cookies may affect your browsing experience.
Necessary Always Enabled
Necessary cookies are absolutely essential for the website to function properly. This category only includes cookies that ensures basic functionalities and security features of the website. These cookies do not store any personal information.
Non-necessary
Any cookies that may not be particularly necessary for the website to function and is used specifically to collect user personal data via analytics, ads, other embedded contents are termed as non-necessary cookies. It is mandatory to procure user consent prior to running these cookies on your website.
SAVE & ACCEPT